What goes up must come down is a principle that bends the paths of pop flies and footballs, but when a parachutist named George Hopkins stepped from a small plane over northeastern Wyoming early on Oct. 1, 1941, gravity was only partly served. Hopkins, 30 but looking younger, could have been the archetypical Dead End Kid—tough, boastful, a swaggering 5’7″ and 118 pounds—only he came from South Dakota not Hell’s Kitchen. On a $50 bet he parachuted onto the top of Devils Tower—and he couldn’t get down. 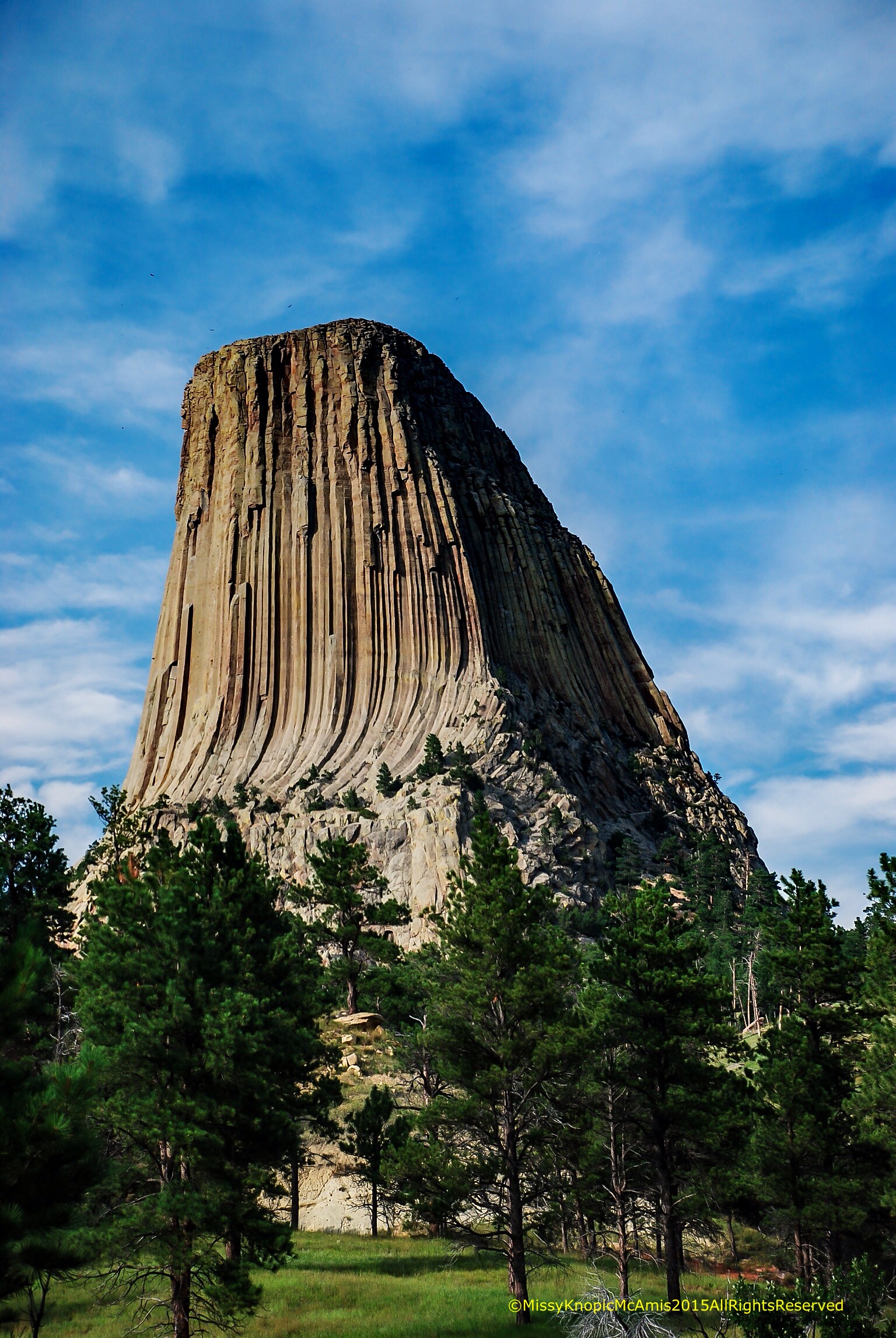 According to Sioux legend, Devils Tower was created by the Great Spirit, who lifted the plug of rock more than 1,200 feet above the Belle Fourche River Valley to save three Indian maidens being pursued by bears. The bears, great brutes, tried but failed to reach the elevated maidens. Instead, the bears slipped and fell to their deaths, leaving a lasting signature—claw marks that give the rock its distinctive, fluted surface. After the bears died, the legend goes, the maidens slid down on a rope of wild flowers. An escape similar to that of the Indians’ was what Hopkins intended. The plane made a second pass over Devils Tower and dropped him rope, a pulley, an axle and a sledgehammer, but they fell to a ledge beyond Hopkins’ reach. Another rope was dropped. Bull’s-eye! But it fell in an enormous Gordian knot that Hopkins couldn’t untangle. Undaunted, he toyed with the idea of clambering down. Among the few observers gathered at the base of the cliff was Newell F. Joyner, custodian of the Devils Tower National Monument. Someone asked him how long it should take the chutist to reach the bottom. “About five hours,” Joyner said, “unless he slips.”

Joyner wasn’t amused by Hopkins’ stunt, performed as much to publicize a parachute-jumping exhibition in Rapid City, S. Dak. as to win a bet. “My first consideration will be for Hopkins’ safety,” he told a reporter. “My second will be to take steps to prevent any recurrence of this event.” Hopkins reconsidered climbing down almost immediately. He may have been a fearless chutist—indeed, he was a former RAF parachute instructor—but he was no mountaineer. He shouted down that it looked too tough, and he retreated to his aerie to work again on the rope. After a while the sun set, the wind came up, and it began to snow. By the next day, Thursday, several missions had been flown over the Tower to drop food and supplies to the chutist. Joyner summoned two mountain climbers, Ernest Field and Warren Gorrell, from Rocky Mountain National Park in Colorado to see about rescuing poor Hopkins. But Hopkins wasn’t faring too badly; the United Press reported that he spent that night “curled up with a bottle of liquor at his side and an army field tent over his head.” The liquor had been supplied after Hopkins tossed down a note requesting it “for medicinal purposes.”

Field and Gorrell arrived and made their way through a picnicking crowd that grew in size each day Hopkins was marooned. Newspapers across the country were picking up the story, the biggest of its kind out of Wyoming since the grasshopper plagues of the ’30s, and it made a nice change from the war headlines usually splashed across Page One. After scrambling up the 400-foot-high mound at the base of the Tower, Field reported that he and Gorrell found themselves “gazing straight up some 800 feet to a nonchalant Hopkins perched on the rim of the Tower’s top.” There were only two known climbing routes. The first had been established in 1937 by Fritz Wiessner, an expatriate German living in the U.S. Wiessner’s line followed a risky path, a vertical crack some 70 to 80 feet long and about six inches wide. After studying it, Field decided their best hope lay with the second route, worked out in 1938 by Jack Durrance, a dashing young American climber who had spent much time climbing in the Alps. Durrance’s brother, Dick, was one of America’s finest ski racers in the ’30s. Field and Gorrell tried Durrance’s route, negotiating a 10-foot wall with only a two-inch crack for purchase, and next a leaning column 18 feet high. Then they stood on a small, nearly flat platform at the base of a 60-foot pitch that was the key to the rest of the ascent. There were two tiny cracks, three feet apart, running the length of the pitch. Except for that, the face of the rock was smooth. “We both tried to ascend this pitch,” Field reported, “frontwards, backwards, sideways and endways—with no luck.” They backed off, but left a fixed rope hanging from the top of the column. When they returned to headquarters, Joyner showed them a telegram from Jack Durrance. Back East at Dartmouth, where he was a student, Durrance had read of Hopkins’ predicament and wired word that he was coming to the rescue. The next couple of days Field and, Gorrell worked at making Durrance’s climb easier, driving iron spikes into cracks too large for conventional pitons, and leaning an extension ladder halfway up the difficult 60-foot pitch. Durrance, joined by another Dartmouth climber, Merrill McLane, began a dramatic cross-country dash. They flew to Chicago, where they declined reporters’ requests for photographs, and continued by train to Denver.

Meanwhile, on top of Devils Tower, Hopkins cursed his rope, by now frozen hard, and passed the time counting rocks. An airplane had dropped him a fur-lined aviator’s suit. “Quit worrying about me up here,” he wrote in a note pitched over the side. “I’m all right.” On Saturday, Oct. 4, 700 people spent the day at Devils Tower, giving themselves stiff necks. Meanwhile, two other climbers had arrived from the Tetons, Paul Petzoldt and Harold Rapp. Durrance had worked as a guide for Petzoldt, and once had applied for the guide concession that Petzoldt held in the Tetons. Rapp, taller than 6’7?, was nicknamed “Timberline.” In Omaha, a newspaper announced that it had hired a Goodyear blimp, the Reliance, to fly from Akron and pluck Hopkins off the top of Devils Tower, but estimated it would take at least three days for the blimp to reach Wyoming.

Durrance and McLane arrived in Denver, where they added Alpinist Chappel Cranmer to their party. Then they drove to Cheyenne, Wyo. and picked up Henry Coulter, another Dartmouth man and Durrance’s brother-in-law. With a Wyoming police escort clearing the way, they reached Devils Tower late Sunday.

Bad weather in Akron grounded the blimp, but in a cold rain at Devils Tower a crowd of several hundred watched and waited. On top, during Hopkins’ fifth night, it snowed again. At 7:30 a.m. Monday, Hopkins’ sixth day aloft, all eight climbers—Durrance, McLane, Cranmer, Coulter, Petzoldt, Rapp, Field and Gorrell—began working their way up the rock. Durrance, in the lead, was grateful for the spikes and ladder because the face of the Tower was glazed with ice, though he was upset that Petzoldt, following, seemed just as interested in taking pictures for the press as in providing belays.

Field, the Rocky Mountain park ranger who had been on the scene now for four days, was awed by Durrance’s climb. Jamming his hands into small cracks, wedging a foot where the crack widened, driving pitons and two-by-four stakes, Durrance steadily ascended. It took nearly an hour for him to make the 30 feet from the top rung of Field’s and Gorrell’s ladder to a ledge. Durrance secured a rope and the others came up.

Back in Akron, in clearing weather, the Goodyear blimp took to the air, it made Fort Wayne before deteriorating weather forced it down. Now the climbers faced easier going. The angle was less steep and there were more secure places to belay. About 75 feet from the top they reached a sloping shelf where it was possible to walk. The only ticklish moment came at a four-foot break in the shelf over a 500-foot drop. One by one the climbers leaped the gap. At four o’clock they met Hopkins on the summit. He was sorely disappointed no one had brought any more liquor, but he chatted amiably.

The thousand feet of rope lay strung about the acre-and-a-half surface like a giant spider web. Field made a mental inventory of the gear Hopkins had acquired—several blankets, a tent, the fur-lined flying suit, boots and helmet, gloves, hot water bottles, chemical heating pads, portable stove, coal and wood, flashlight, ax, and enough food to fill a general store. The most valuable stuff, including Hopkins’ parachute, they heaved over the edge. The climbers gave Hopkins a quick lesson in rappelling, something he had never heard of, and started the descent. Hopkins took the middle position and Durrance came last. The chutist was an apt pupil and had almost no trouble swinging down the mountain, as slick as any Indian maiden.

With a bright spotlight lent by a Denver radio station, and the headlights of several hundred cars providing additional illumination, the climbers approached the base about 9 p.m. Hopkins faced the crush of reporters and well-wishers even before the rest of the climbers were off the rock. Considering the six days and five nights he had been stranded on Devils Tower, Hopkins was in good shape. “I feel first-class,” he said, “but I need plenty of sleep.” Other than the cold and boredom—”I bet I counted the boulders on that damned mountain peak a thousand times, and gave ‘em all names you couldn’t print”—his biggest problem was the resident rodent population, which threatened to devour his foodstuffs while he tried to sleep. Particularly cheeky were what he called “bull chipmunks.” The fastest climb of Devils Tower was done in 18 minutes by Pinedale Wyoming Native and legendary Free-Climber, Todd Skinner in the 1980s.  On October 23, 2006, Skinner, 47,  fell to his death over 800 feet descending the face on an overhanging wall of Leaning Tower in Yosemite when his belay loops on his harness failed. 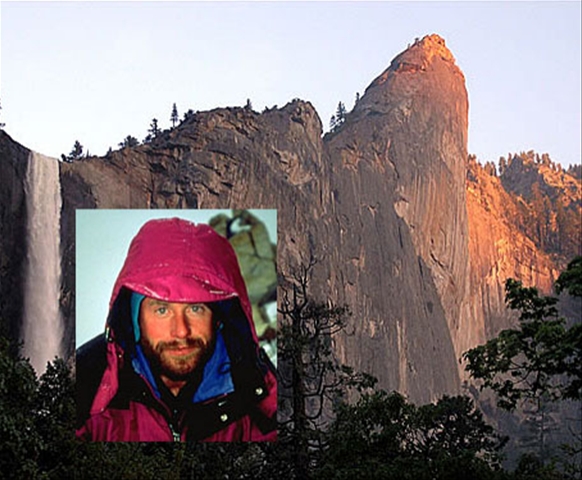 As much as I know, no one has Base Jumped from this tower … or maybe they are jumping it every weekend and are doing a great job at keeping it under the radar …

This site uses Akismet to reduce spam. Learn how your comment data is processed.